At the Senior Men’s Club Luncheon on Tuesday, January 8th, Bailey Sisoy Igro talked to us about her book, Rosie, a Detroit Herstory. Bailey is the owner of Detroit History Tours and the proprietress of the Detroit History Club. She has appeared on television as a contributor on the Travel Channel’s Tough Boats and Globe Trekker series and is a common guest on history-themed podcasts. 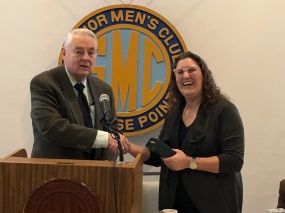 Rosie, a Detroit Herstory is a remarkable story for young readers about women workers during World War II. It features informative, rhyming text by the author and beautifully illustrated original artwork by Nicole Lapointe. The story begins with the start of the Second World War and the eventual need for women to join the American workforce as men shipped out to war. By the end of the story, we had a better understanding of who and what Rosie the Riveter really was, how Detroit became a wartime industrial powerhouse, and why the legacy of women war workers is still so important. To illustrate her talk, Bailey projected photos of the era including images such as the cover of the Ladies Home Journal magazine and as well as a timeline of events.
Bailey told us she decided to write the book after doing oral history interviews of World War II veterans for StoryCorps. After several years of interviews, one veteran told her she was making a mistake because she was not asking about the wives. Bailey and her Detroit History Tours guides then began nine years of interviewing women ordinance workers from the Detroit and Ypsilanti area. They worked with the Yankee Air Museum and organized Tribute Rosies to dress like Rosie and help save the Willion Run bomber plant. Bailey and Nicole Lapointe were also inspired by their trip to the 2017 Women’s March in Washington, D.C., and the overwhelming number of women who came together for the event.

Rosie, a Detroit Herstory is written for young readers but can be enjoyed by anyone interested in the history of women 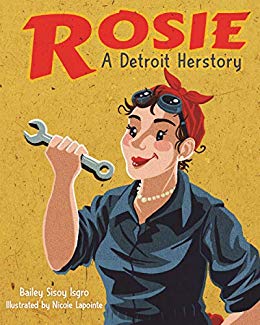 working for the war effort. Across America, women produced everything from planes, ships and tanks to ammunition and uniforms, in spectacular quantities. Their skill, bravery, tenacity, and spirit became a rallying point of American patriotism and aided in defining Detroit as the Arsenal of Democracy.
Rosie the Riveter was the spirit of the home front during the war that said “We can do it.” The story behind the iconic image of Rosie the Riveter unfolds in rhyming verse and colorful illustrations that convey the strength, bravery, diversity, and patriotism of the hardworking women on the home front during World War II.

Even though women workers were invaluable to the war effort, they met with many challenges that their male counterparts never faced. Yet, for all of their struggles, their successes were monumental. Today, we refer to them as “Rosies”-a group of women 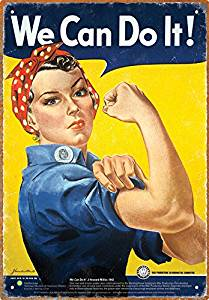 defined not by the identity of a single riveter but by the collective might of hundreds of thousands of women whose labors helped save our world.

From: Uncategorized
← Need a Ride?
SMC Luncheon Speaker: Tyler Hinton →
No comments yet

This site uses Akismet to reduce spam. Learn how your comment data is processed.